A monster created by the maternal instinct and love of a mother is what will give you a thrill and a jump to your seat when you watch this horror movie. Mama is a film produced by Guillermo Del Toro and directed by Andres Muschietti. After watching the movie, I can say several good things about it and few bad ones. The film is not big in the box office but it definitely got stable sales worldwide.

The film started with breathtaking scenery of a Canadian winter alpine and then slowly phasing into a small deserted cabin in the woods. It has an early start of thrills as the forest folks find out that this cabin is inhabited by uncommonly tenants. It was a short thrill that gain my attention and makes me to wait more on what to come afterwards. 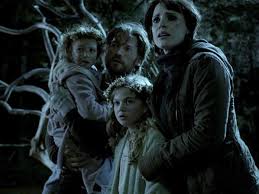 A great horror movie performance of the cast

First I will give my commendation to the two girls who played the siblings in the movie. It was a good performance given by Megan Charpentier who takes the role of Victoria, the older sister and Isabelle Nélisse as the younger sister Lilly. Their innocent and yet hesitating looks gives the thrill a face you want to see if all will end well for them and what horror lies along with their misfortune. Giving their role intensity is when their overprotective ghostly mother jealousy turns on in their uncle and his wife. They have shown good facial expressions and strong emotions fitting for the movie.

The couple, Annabel played by Jessica Chastain and Lucas played by Nikolaj Coster-Waldau, is also commendable in the film. Jessica shows a performance enough to make her character strong. She has given a terrific acting that shows another face of a motherly love; a distantly attached, reluctant, patient and slowly warming up relationship with her new adopted children. Nikolaj was an unknown name to my ears but I like the way he portrayed his character. He was an ordinary man just wanting to make her nieces live a normal life. His typical emotions and reactions as a surprised uncle make his role a memorable one.

The movie story, effects and production

The movie was produced with a fair budget so expect to have some weaknesses in the effects and sceneries. The combination of lights, effects, venues and characters make-ups are just enough to show a horror film. It does not have that memorable effect or productions that viewers will talk about after they watch the movie.

The film with all its shortcomings in its production is still a good horror movie to watch. It has a decent story and a good cast to show it.