With a budget of $3 Million dollars, The Purge movie has awe-inspiringly surpassed it. The film offers a story where crime and violence is legalized for one day. The thrill and suspense of the plot are really intriguing that pulls many viewers to watch it. The trailers seen in many movie-related sites are inviting and leaves the person’s curiosity in an anticipating condition. Gathering some comments, feedback, and thoughts of critics and viewers, I ended up with this general information.

The movie has a great concept

It was a good concept to play and focus on the violence of human nature. Society suppresses this humanness and put order if such act happens to inflict damage and danger to anyone.  The “what if” question really lingers in a person’s mind if he or she can see the trailers of the movie. What if the society allows this violent nature of man to be unleashed even in a day without worrying about legal consequences?  What if the people had the chance to harm, injure, and even kill a person with or without any reason to do so? Some questions are really intriguing that curiosity leads the public to watch the film. The story is new and viewing public got excited.

The movie is just for entertainment

If you have any hatred or anger that wants to burst, this movie can communicate. But the movie does not really have that solid thing to say or do not really address a real social issue. It was created to simply entertain viewers and the story is just a product of the writer’s imagination.

Security is in its highest condition, a person shout for help, a child opens the door and mayhem start. This a common suspense tactics used again in this movie. The trailer of the movie says it clearly and from then a viewer can really predict what will happen. This is where the film falls short. It lacks the memorable thrill and all you will see is just an old idea to entertain viewers. 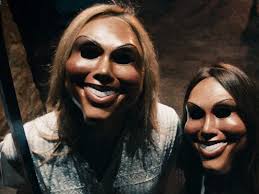 location. The type was more “becoming” on these present days and really had gained favors from many. The Purge was one of these movies that really had that brilliant visual impact.

The film really hit the big spot. For a low budget production, it has produced a big say in the film industry and still counting.